You can think of GitHub as a cloud service that helps you store and manage your code. Because it also handles version control, it also helps you track and control changes to your code. But what exactly is Git and Version Control?

If you have a big piece of software, it may not be safe to be working directly with the official copy of the code. This is especially true if you have multiple people or teams trying to change and test out new featurs of the code. Version control can help developers work safely with code through branching and merging.

So what is GIT?

Then what is GitHub?

You can have version control and use the GIT control system without connecting the entire system to the cloud. GitHub allows for easy cloud-based git repository hosting. For many new devlopers, GitHub also provides an easier introduction to version control by providing a user interface. Many developers, especially those that have used GIT before GitHub live in the command line.

Go to GitHub.com and sign-up for an account. You will need an account if you want to take advantage of version control. Technically, any public repository will allow you to look through and download the code base. Depending on the systme you're using, you may not be able to easily clone repositories into your IDE without an account.

Accepting the Assignment / Having a Repo

The following instructions are for assignments given through GitHub Classroom. If you already have a repository, you can simply visit your repository to look for the git link for cloning into eclipse (skip to step 3 in this section).

Cloning (Importing a Repo into Eclipse)

Once you have your repository created with the starter file (automatically done by accepting the GitHub assignment), you can now connect that repository to your eclipse workspace.

Committing changes creates a log and copies of your files in their current state but it is done locally so changes are tracked only on your computer. Pushing allows you to actually push the changes and logs to the cloud.

1. Clone the repository where you want to add projects
2. Right-click on the project folder under project-explorer as shown below 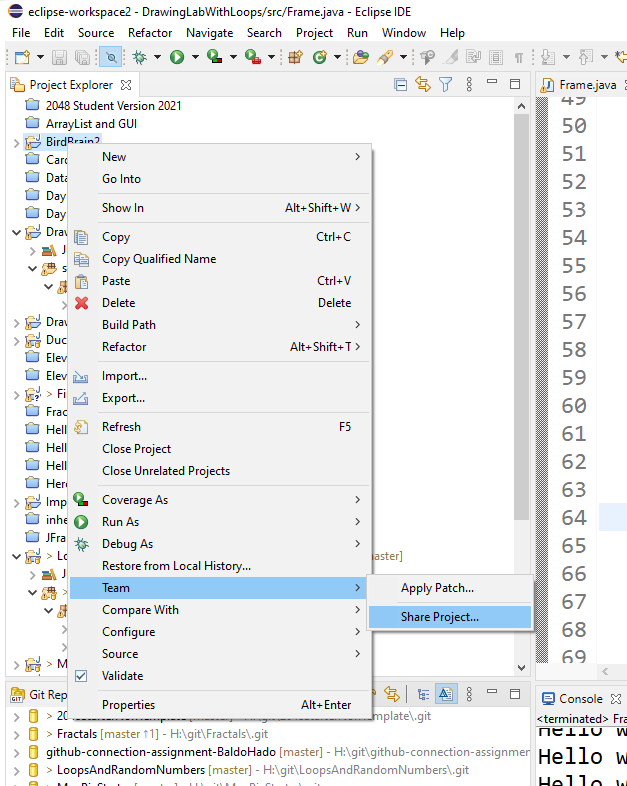 3.Select the repository you wish to use 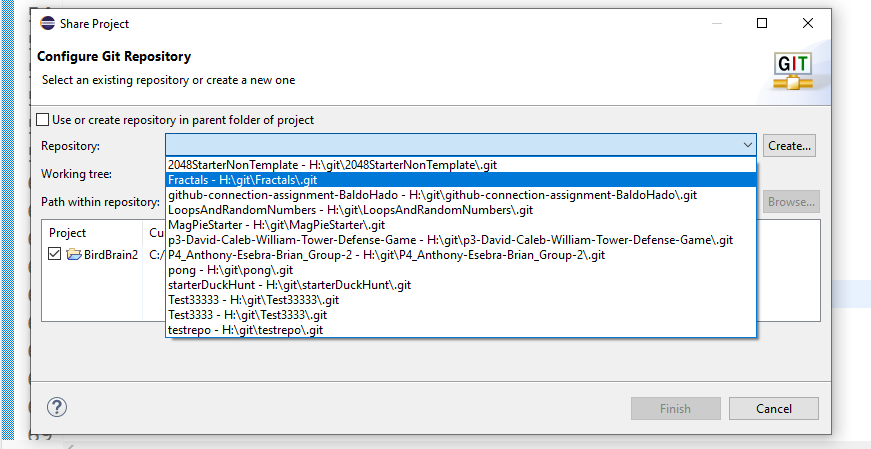 4. Commit and push. This will push your project to the repository.

Pulling Code From GitHub (Updating a cloned repo in Eclipse)

If you are working on code on multiple computers, you will likely have different versions on machines until you pull all the changes.

To update an existing project that's linked to your GitHub Repo in eclipse you right-click on the project, select Team, and Pull. Try both pull options until it updates your project. Pulling from GitHub should pull any changes to the GitHub repository since you last pushed or pulled.

Remember, commit and push your code to GitHub anytime you have changes that you want to be tracked! Forgetting to push/commit code from your home device does not excuse you from the work needed to be submitted during class.